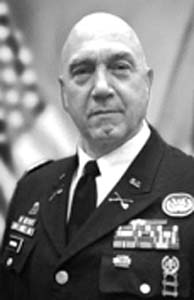 Commander of the U.S. Patriot Corps

Brigadier General Patton was sworn in as the Commanding General of the United States Patriot Corps on November 18, 2020. Before this he was the Deputy Commander with the United States Veteran Reserve Corps and Battalion Commander with the South Carolina State Guard’s 1st Battalion (The Highlanders). During this previous tenure, he has been involved in the humanitarian relief efforts in 2015 during the ‘1000 year’ flood where he was awarded the Humanitarian Service Ribbon for his service. He was also called to duty for Hurricane Matthew in 2016, Hurricane Irma in 2017, the NDMS mission in September 2017 and disaster relief missions caused by Hurricane Florence in 2018.

Having previously served in the Royal Navy since 1974, he retired at the Rank of Lieutenant in 2007. During his career as a Medic he saw active service during Operation Corporate in 1982 (Falkland Islands), Operation Provide Comfort (Northern Turkey and Iraq) in 1990 and in the Former Yugoslavia in 1993 with the United Nations. During his career path as a medic he served on numerous warships, HMS Antrim in 1976, HMS Intrepid in 1989 and HMS Fearless in 1999.

Having qualified as a Registered Operating Department Practitioner (Surgical Technologist), together with his Military Medical Emergency Skills, these were utilized while serving for two years with the Combined Services Special Medical Team in support of Special Forces Operations. As a Petty Officer he served with 846 Naval Air Commando Squadron which shortly after joining was sent on his first mission as a Squadron Medic to Northern Iraq.

Following a two-year posting to the Royal Naval Medical Staff School at the Royal Naval Hospital Haslar as the Royal Navy’s Lead First Aid Instructor, he returned to the Fleet Air Arm as Commando Helicopter Operations Support Cell Medic. The secondary role with this unit was to provide medical support to Aircrew and Support Base personnel, in addition lecturing on Arctic Survival while in the Arctic Circle 5 months out of the year at the Royal Norwegian Airforce Base in Bardufoss. Following a tour in Bosnia and 3 tours in Norway he returned to the Naval Hospital.

Following his promotion to Chief Petty Officer he was posted to Singapore in 1997 to work with the Royal Naval Liaison Team as the Fleet Medical Liaison Officer working in conjunction with the British Embassy for a major exercise in that region. As the sole service medic, he was responsible for the care, hospitalization, transportation and aeromedical evacuation of dozens of servicemen from all three services.

Following his selection for a Commission and attendance at Britannia Royal Naval College in May 2000, his first appointment was as the Officer in Charge of ODP Training at the Royal Defense Medical College. This later relocated to the University of Birmingham City and became the Defense School of Healthcare Studies.

Staff Officer (2) – Training at the Royal Center of Defense Medicine Headquarters. Responsible for coordinating specialist courses for all tri-Service Military Doctors at all levels.

Since leaving the Royal Navy in 2007, he emigrated to the USA and now lives in Woodruff, South Carolina with his wife Tracie and two children Abby and Miller.