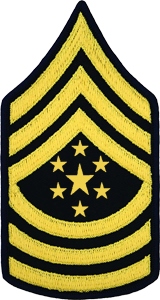 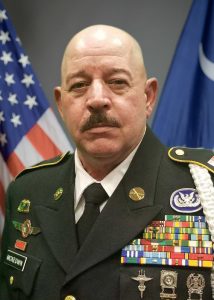 Sergeant Major of the U.S. Patriot Corps Christopher “Hammer” McKeown enlisted in the United States Army in April 1983. He received his Basic Training and his first phase of Advanced Individual Training (AIT) at Fort Jackson, South Carolina followed by phase two at Fort Sam Houston, Texas graduating from the Academy of Health and Sciences as a Nutrition Care Specialist and was assigned to the US Army Medical Corp.

During his active duty service, SMPC McKeown was stationed with the 4th Combat Support Hospital and US Army MEDDAC from October 1983 to January 1985 at Fort McClellan, Alabama. In January 1985 was reassigned overseas to the 121st EVAC Hospital in Seoul, Korea and served till May 1986. In July 1986 Command Sergeant Major was reassigned to the 46th Combat Support Hospital at Fort Devens, Massachusetts and served till January 1990. In January 1990 Command Sergeant McKeown was reassigned to oversee the reactivation of the 12th Mobile Army Surgical Hospital (MASH) in Wiesbaden, Germany. In September 1990 SMPC McKeown was assigned to oversee the logistics of transforming the 12th MASH into the 12th EVAC Hospital in both equipment and personnel and be ready for deployment by November 1990 in support for Desert Shield. In December 1990 SMPC McKeown deployed to the Middle East for Operation Desert Shield which later became Operation Desert Storm. In May 1991 SMPC McKeown returned to Wiesbaden, Germany and served out his tour of active duty till April 1993.

SMPC McKeown’s civilian experience include Meat Cutting, Restaurant and Business Management and Farming. After Active Military Service SMPC McKeown became a Certified Dietary Manager (CDM) and worked in several locations in South Carolina and took over operations for the Family Farm. In 1998 CSM McKeown started McKeown’s Heating and Air Services which specialized in HVAC in the Modular and Mobile Home Industry. In 2001 he took McKeown’s Heating and Air Service into a full Residential HVAC Company which is still in operation today.